If we were lucky to travel to the Earth’s centre, perhaps as part of an international crew of terranauts chosen to observe and investigate our planet’s interior… just before entering the molten core, we would insist on making a “must stop” of our journey, almost like one of those vista points you can’t resist making a stop at, cruising along some imaginary coastal highway.

Travelling down the Earth’s radius, about 2,800 km beneath its surface, we enter the world, unlike anything we have seen so far. The molten core, approaching temperatures of the Sun’s surface, is now within a short reach. Its surface appears like that of a hot planet. Our barometer reads about 130 gigapascals, 1.3 million times the atmospheric pressure we feel at the Earth’s surface. Looking down towards the core-mantle boundary, the change in the rocks’ properties is tremendous and even more dramatic than the change between the atmosphere and solid earth. A transition from a rocky mantle to an iron-nickel alloy core is so sudden that seismic waves released in a large earthquake at the Earth’s surface bounce off this boundary with ease.


If we could peek through an imaginary window of our fictional device, we wonder what we would see there. Would we eyewitness vast continent-like domains of a material different than the ambient mantle, similar to what our seismological probes indicate? Would there be other, much smaller features of different properties, perhaps embedded in the middle or gathered around the edges of these large domains? Would there be mountains, pancake-like structures, giant stalagmites, or even blocky chunks, of what once used to be the lithosphere, scattered around the place? Would there be vertical flows of thick, viscous lava, domes, and plums of hot material like giant mushrooms rising on the horizon? Would it be a hilly landscape, a smooth or rugged surface? And what sorts of other surprises the Earth has for us in her store? We don’t know the answer to that, but we wish we could lay our eyes upon that magical landscape just for a moment to grasp the truth.

To discover the truth about our planet is the main aim of our quest as scientists. How right or wrong we have been, have we ever gotten close to the truth, or we are just a bunch of silly clowns racing with others, convinced that our, and our images only, represent the true Earth? Almost everything we pursue on our quest is hidden deep beneath our feet, in this case, clocked in the lowermost mantle, so it must be questioned, deduced, reasoned. Through the process of inference, we infer Earth’s properties using computational tools based on the physics of seismic wave propagation and geophysical inference theory. Seismic tomography – the idea stolen from medical tomography in the 20th century, advanced by now, generations of geophysicists, and adapted for imaging our own planet’s body – becomes our main toolbox, a probe so to speak, with which we examine the deep Earth.

We have joined forces with Rhys Hawkins and Malcolm Sambridge and used “tomography on steroids”, speaking metaphorically, to look at the base of the mantle. The image we chose to show here is not our resulting lowermost mantle image; it is an artificial tomogram (top panel) that we can “recover” using our tomography method. In other words, if the lowermost mantle looked like the upper panel image, with the features of different sizes and shapes, where red is slower and blue faster than some average ambient mantle, our method would allow us to recover it to the level of detail shown in the lower panel. Not bad at all, noting that even some very small features are recovered to an excellent level of precision in the areas of the lowermost mantle covered well by seismic waves. But why does that precision matter to us so much?

Well, despite significant progress in recent years, the lowermost mantle is not well understood, and various tomographic studies on a global scale, along with regional studies that focus on seismic waveform modelling, pave the path towards higher resolution and new understanding. Essential questions are on inhomogeneities' distribution, shape, size, and composition in the lowermost mantle and their critical role in the mantle and core dynamics. While there is a consensus on the long-scale length structures inferred from long-period waves, there are notable differences in details of the lowermost mantle’s tomograms stemming from the use of different imaging methods and datasets. We use a large traveltime dataset of shear waves to perform a high-resolution probabilistic shear-wave tomography. The new shear-wave speed tomogram and comprehensive resolution-estimations indicate that short and medium scale inhomogeneities are omnipresent features of the lowermost mantle.

So, what would we experience in that imaginary device if we were able to get down there and take samples by some virtue of modern technology? It would most likely be an astonishingly complex world. In our paper, we present observational evidence that the lowermost mantle contains a wide-spread heterogeneous material.

If you’d like to read more, our paper has just been published online in the Journal of Geophysical Research:

A preprint version is also freely available via EarthArXiv: 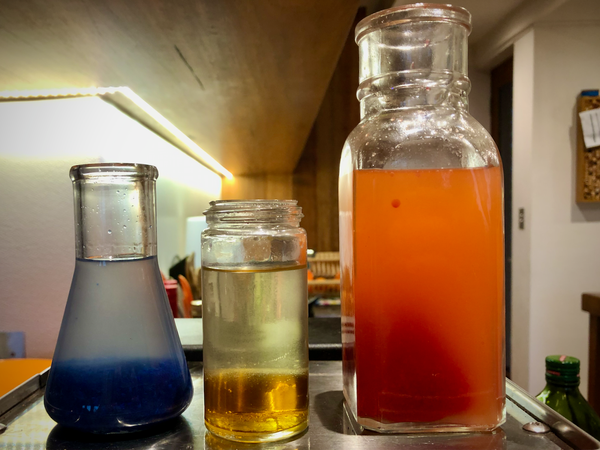 Hands-on experiments explore the details of thermochemical convection. Build your own Lava Lamp and learn why the continents don't get sucked down into the deep Earth. 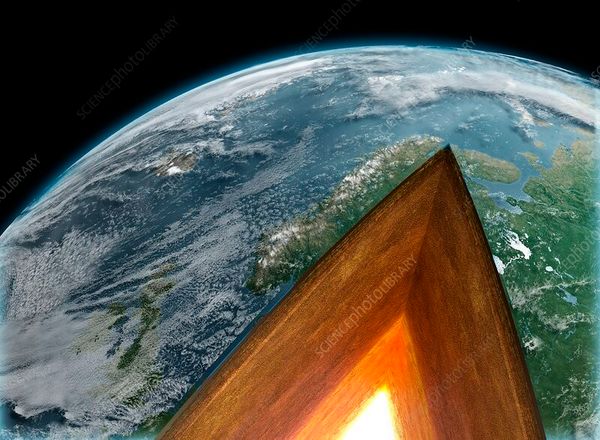 In these one-dimensional (1D) models, the Earth (or, as a matter of fact, any other planet) is divided into kilometres thick spherical layers, just like an onion on a much smaller scale