We (the team of 9 scientists and technicians from the Australian National University’s Research School of Earth Sciences) are out of strict 2-week quarantine and ready for a pre-voyage mobilisation. This includes a series of inductions and briefings prior to boarding, boarding, and final stages of preparation for the voyage. The Research Vessel Investigator that will take us to our destination in the Southern Ocean, is the premier Australian research ship, 94 meters long, 18.5 meters wide, and 10 stories tall, with the capacity to carry 60 crew and scientists. Its cruising speed is 11 knots, and it is capable of staying 60 days at sea without refueling. Its gross tonnage is 6082 GT, for those who are interested in this level of detail.

On this voyage, as part of the project “Probing the Australian-Pacific Plate Boundary: Macquarie Ridge in 3D”, we will be deploying a total of 29 ocean bottom seismographs, and the most important part for us so far has been on how to get these instruments safely to Hobart and onto the ship. The seismographs that we will be deploying are of two types, and in the photos, you can see one type in yellow and another type in orange. For example, the yellow seismographs have a mass of 250 kg, with their weight significantly reduced in the water while they sink to the ocean floor. They have to be strapped and secured on the ship’s deck for safety and prevention of any damage.

Prior to that, they had to be charged for their continuous operation on the ocean floor for about 1 year. These broadband seismographs typically have useful responses to seismologists in the frequency band between few tens of seconds on the long period end to a few tens of Hertz on the short period end. The instruments that are equipped with sophisticated sensors and digitisers also have batteries, release mechanisms, and ballasts that help them sink to the bottom. An additional instrument attached to seismographs is a hydrophone, with the frequency response typically around tens of MHz.

If you have read the media release and were wondering about what I said about whales, yes, hydrophones can hear them! Our team from ANU has joined a crew of two from the University of Tasmania together forming the “science crew” of 11 and to 30 other people who will be sailing with us, as part of the regular seagoing Marine National Facility crew and the ship operating crew. We have all been impressed by the RV Investigator’s size, feel, and its modern facilities, as well as the professionalism of the people who run it. My students and postdocs told me how much they enjoyed the mobilisation time, the delicious food, and our cozy cabins. This is all well-appreciated in anticipation of a challenging voyage to the “furious fifties” southern latitudes that are in front of us. 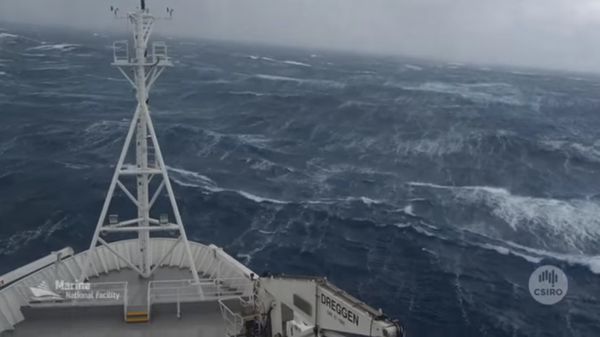 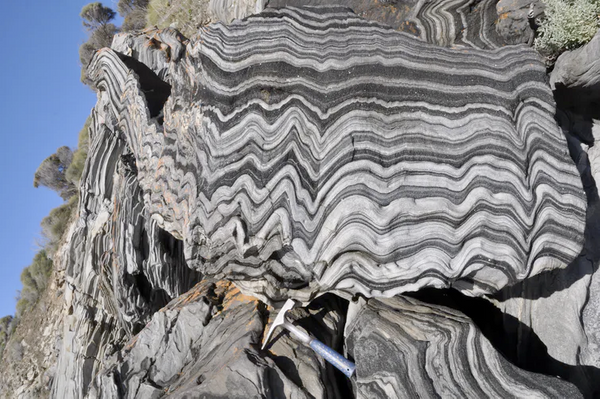 Figure: Photographed on Kangaroo Island, this rock – called a ‘zebra schist’ – deformed from flat-lying marine sediments through being stressed by a continental collision over 500 million years ago. Dietmar Muller